Nintendo Switch Things That You Expect

Gamer’s across the world love the Nintendo switch and when rumors turned up about a potential switch mini and switch XL. People wondered what they would be like?

We certainly did so today we’re gonna take a look at what those two systems might be like.

speculation is rife when it comes to the idea of the switch mini. Ever since the rumors are spreading that, Nintendo is going to shrink its latest console. People have been putting forward their ideas about what it’s gonna look like. One of the best theories came from someone called ‘JTS’ who was a poster on the neogaf website. JTS thinks Nintendo is going to come up with something a fair bit smaller than the current switch. We guess we’ll have to call the switch ‘classic’ or something like that and something more simple too. Here is a hypothetical image.

The detachable joy-cons are gone, replaced by an all-in-one unit. There is going to be a 5-inch screen. And it looks like it will be roughly the same size and same weight as the average mobile phone. JTS thinks there will be a range of color options. while it won’t have a separate dock, it’ll be compatible with the dock switch players already have. Best of all it’ll sell for less than $200 so it’s mini in both size and price, talk about a bargain.

One of the things which makes Nintendo arguably the greatest console makers of all time is the way they’ve used previous systems to develop contemporary ones. Here’s an example, while the N64’s joypad seemed out of this world and revolutionary. At the time the genesis of its design was in the Super Nintendo’s controllers. The curves, the layout, the shoulder buttons they are all there, they are just made bigger. People who have theorized about the potential switch XL have kept this in mind when they’ve designed what they think it’s gonna look like. One of the best examples comes from the creative minds behind the console deals website.

They came up with a switch XL which we think seems pretty nifty. While the current switch is at least partially designed for people to play while they’re on the go. This hypothetical system is designed for handheld play at home. There are a larger body and bigger screen, but its designs of the bezels around the screen are actually smaller. It is a little change sure but it just makes this theorized system look nicer. It is the sort of little touch we would actually expect Nintendo to do themselves.

Nintendo has always been pioneers when it comes to handheld gaming. Whether it was The Game and Watch which was an introduction to handheld video gaming back in the early 80s. Or the Game Boy which is still the blueprint for a handheld system. And the 3DS, Nintendo has done everything and they’ve pretty much done it first.

When news came out Nintendo was dropping support for the 3DS at the end of 2018 people got to thinking. Especially, as the news came just as the Nintendo switch was dominating the markets. What if this switch was gonna lock down into a portable model with a new smaller version. The idea of the switch mini was an intriguing one, but what if rather than a shrunken regular switch, it was somewhere between the 3ds and the latest model. We find this idea fascinating and it makes us hope Nintendo makes the switch mini a reality. so, don’t automatically expect the new system will necessarily look like a shrunken switch. After all, Nintendo does like their surprises.

When people started to pay attention to rumors that Nintendo was going to release a switch XL at some point. They naturally started to wonder what the system would be like. And one thing was pretty sure right from the beginning, the XL would be bigger than the original one. That sounds like a perfectly natural reaction to have on account of the name. However, while Nintendo has always been straight up, they wouldn’t be the first to give a console a misleading name.

YouTuber Kevin Kenson decided to take things to the next level. 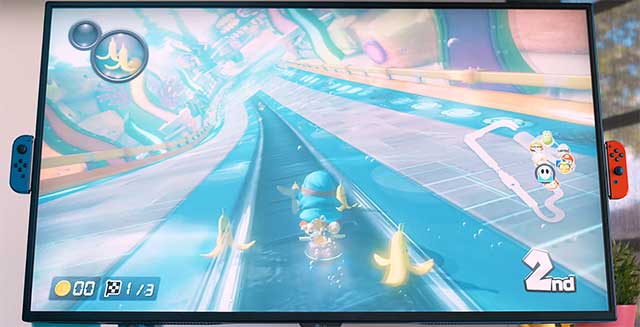 Rather than a slightly larger getup, he decided to make it absolutely massive. He got the Nintendo switche’s dock hooked it up to a TV monitor and gave it a portable battery. Then, he stuck the controllers on the side and what he ended up with was totally impractical for portable gaming. On the other hand, it is really cool. It says a lot about the graphics on the switch. That despite playing with a far larger screen than one might expect, they still manage to look completely awesome.

Doing it for the kids?

when you’re a company like Nintendo, people are always wondering what you’re gonna be doing next. There is no exception to this after the Nintendo switch’s announcement. Before the Japanese gaming legend’s latest product had even hit store shelves, gamers and gaming experts were already speculating what would come next.

People have been talking about the Nintendo switch mini before the original console was available for purchase. Anyway, the speculation only increased when gamers were able to play the switch for themselves. There was a little bit of a sticking point, Which was centered around one market Nintendo had always done well with, young kids.

The Nintendo switche’s controllers are a bit too big for smaller hands. So, what was the best way to get youngsters playing the new best games? make things a bit smaller of course. A group of experts from Citigroup said that’s why the switch mini was inevitable. It is going to target younger gamers. Then we reckon it’s natural to assume there will be some more kid-friendly games available for it.